My father lives confined to the surgical bed in my parent’s den. A tough existence for anyone, but harder for someone who once ruled Barone Manor with sharp suits and an iron fist. A father who was always loved by his children but, if we’re being honest, they were also smart to fear.

But that was then. Before a disease got the edge. Today, suits have been replaced by undershirts and he only leaves the house via the ambulance that carts him to dialysis. If you knew him then, you barely recognize him now.

Seven years ago my father lost his left leg, toe-by-toe, to diabetes. He’s spent the last eight months restricted to his at-home surgical bed fighting to save his right leg. Despite staying off it as ordered, the foot is dying from lack of oxygen; it’s becoming septic. The doctors haven’t told him yet, but he knows. We all know. It’s time to save his life and take the other leg. But he’s vowed he’ll die before he sees it happen. Content to avoid the conversation and the anger, the doctors, for now, pretend there are alternatives.

In town for a few days, I visit my parents. My mother and I powwow in the kitchen out of earshot to talk options. When terms like “nursing home”, “rehab” and “long-term solutions” are discussed, I poke my head around the corner to watch him. He looks defenseless, childlike even, chewing his shirt, talking to the people on TV and riffling through his “camp bag” – the blue tote that holds his books and movies for dialysis. He catches me watching him and waves his stump hello like an elephant maneuvering its trunk.

It used to turn my stomach. Now I can’t help but smile.

On good days, my dad is playful. On bad ones, he’s angry. But on all days, I am his Favorite. His only daughter sandwiched between sons, I am his constant defender and his champion. I send him my recent press clippings, knowing he uses them to flirt with the hospital nurses and to fight for his choice of prime dialysis chairs.

Noticing his good mood, I grab his Jet Checkers set and challenge him to a game.

Checkers is a new ritual for us. The game gets his mind going and sparks conversations we don’t have otherwise. As we play, my dad talks. As his daughter, I listen, storing his lessons over time.

The Checkers game we’re both pretending to play is up. Despite his shameless cheating, my father’s backed himself into a corner, opening up a triple jump play. One move and I sweep the board.

“Let me win or get nothing when I die.”

I smile, make my move, crush him. Never show weakness. Another lesson from my dad and I know he wouldn’t want it any other way.

[In March 2011, my father lost his battle to save a useless leg, but regained his freedom. Today he’s back to ruling Barone Manor – this time with the help of a red mobility scooter that he goes “off-roading” with in our backyard to command over the peach trees. Interrupted, perhaps, but never defeated. 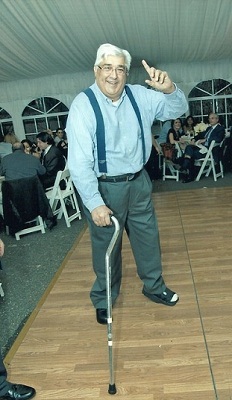 15 Responses to “Lessons from an Italian Father”

Leave a Reply to Sarah Page